Cormorants from St Michael’s Manor in St. Mary’s County.  They were very far away, and my focus was off a little, but I liked the reflection... 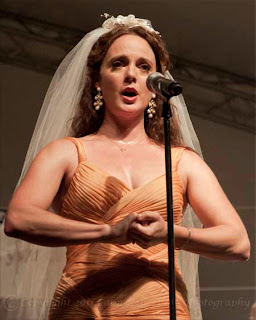 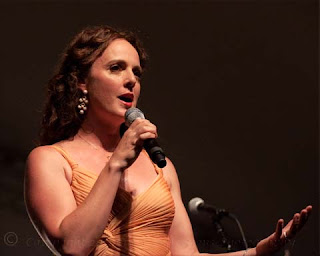 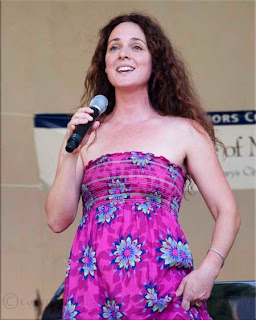 The final River Concert in 2011 was delayed until 7:30PM on July 29th to reduce the effects of another hot summer evening at St. Mary’s College of Maryland on the green overlooking the St. Mary’s River. Cooling stations with water and air conditioning were once more in place, to avoid health issues from the temperatures in the high nineties.


The concert began with Maurice Ravel’s “Daphnis and Chloe Suites”. The piece was based on a Viennese Waltz. Jeffrey Silberschlag described the work as “a conflicted orchestra with a conflicted waltz and a maestro in crisis.” He told us that the piece was written about the troubles of the collapse of the Royal Austrian family, the Hapsburgs. The music had a strange beginning that was both dark and light at the same time and generally quite dissonant.


A “Trumpet Concerto” by Corrado Saglietti followed, with Jeffry Silberschlag playing solo trumpet. Silberschlag joked that his “mouthpiece has been slipping” so he “borrowed rosin from Jose”, the first violinist. I was glad to see that Larry Vote conducted the piece, since his July 8th performance was sadly rained out earlier. The music had an Italian and pop feel and was mellow, smooth and pleasant.

After presenting plaques to the many sponsors of the concert series during intermission, the star of the series, Broadway’s Melissa Errico took the stage. She sang a powerful performance including a number of popular songs like “Windmills of Your Mind”, “I Could Have Danced All Night” from “My Fair Lady” and “How are Things in Glocca Morra?” from “Finian’s Rainbow”. She amazed the audience with her incredible speed while singing “Getting Married Today” from the musical production “Company” while wearing a wedding veil. Ms. Errico also presented her own peaceful song, “Gentle Child” written about a memorable moment with her daughter, Victoria. Melissa Errico has performed many classic musicals including “Finian’s Rainbow”, “My Fair Lady” which I personally saw in the early 1990’s, “Camelot” and “The Sound of Music”. Like Kate Baldwin, last year’s award winning performer, Ms. Errico also sings often at Birdland Jazz Club.
The last concert of the season wasn’t complete until the Chesapeake Orchestra played its’ signature piece “Sleigh Ride”. We will be earnestly awaiting next year’s performances!
Posted by Joanna at 9:36 PM No comments: Links to this post

River Concert 6: The Eternal Flame Goes On Despite the Heat 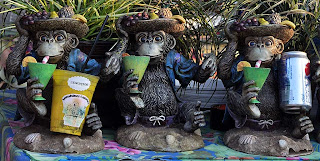 A number of die hard music lovers and the Chesapeake Orchestra attended the River Concert on Friday July 22nd at 730PM,at St. Mary’s College of Maryland in the sweltering heat of high summer. The concert was purposely delayed a half hour, hoping the temperature would drop a little. The college kindly provided four cooling centers with air conditioning and cold water to help avoid health issues in the dangerous heat. Survival required lots of liquid refreshment and a visit to Kona Water Ice or Brewster Ice Cream. The little monkey statues at the Sunshines Catering Vendor described the evening well (pictured).

The evenings fare started with Leonard Bernstein’s “Three Dance Variations” from the ballet “Fancy Free”. This modern work was well played. I enjoyed the 3rd movement Danzon with lots of timpani and other percussion and a similarity to “West Side Story”. The first movement, Galop, was disjointed, abrupt and repetitive, while the Waltz was quieter and jerkier with lots of trumpets.
Judah Adashi’s ”Grace”, a 10 minute work, was presented next and was introduced by the composer. Mr. Adashi explained that the piece was in memory of rock star Jeff Buckley. José Cueto (pictured) expertly played this brief musical work with its soaring falsetto violin part with high notes difficult to even think, and Middle Eastern scales inspired by Adashi’s Israeli parentage.

Adashi’s music was followed by another short work by Jeffrey’s “favorite undead composer, David Froom”. “Amichai Songs” featured an excellent baritone soloist, William Sharp (pictured). While Froom insisted that his third movement, “The House of Lovers” was gentle and romantic, with the words “If we are lucky the house will collapse and the light will be set free for the whole world”, I wasn’t quite sure I agreed.

The highlight of the evening was definitely Gustav Mahler’s “Symphony No. 1 “The Titan”. The early part of the work was about nature and included repeated 2 notes on flute, sort of like raindrops on leaves. Later in the piece, some of the music was written in waltz time (1,2,3!) and the influence of the Hasidic could plainly be heard, along with snatches of “Frére Jacques” in a minor key in the third movement. The last section was definitely the best. How the orchestra survived the last energetic movement without at least one person being escorted away by the Ridge Rescue Squad was unknown, but their determination was much admired. 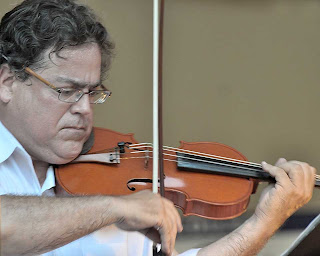 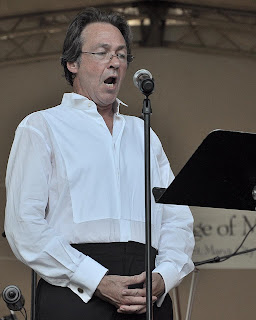 Posted by Joanna at 8:22 PM No comments: Links to this post 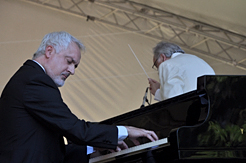 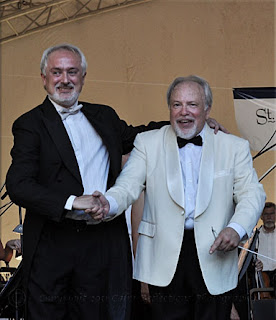 After last week’s rained out concert, Maestro Jeffrey Silberschlag first mentioned that there was a 0 % chance of rain for this concert. He continued, "We went to Spain for a soloist who would be Spanish enough and passionate enough" to play the 2 Spanish works included in the program. The theme was European Vacation, and combined Spain and the Alps.  The Chesapeake Orchestra featured pianist Antonio Soria, a professor from the Conservatorio Superior de Música de Castellón in Spain.


The first musical work, "Night in Madrid" by Mikhail Glinka was a beautiful piece with lots of soaring strings and arpeggios on piano.

It was followed by “Manuel DeFalla's "In the Garden of Spain".  Jeffrey informed us that we would hear the matador and the bull. The 3 movement piece was softer at the beginning with a 2 note ending. The second movement was dance-like with a repeated theme with theme variations and was much faster. There was even a scary section with lots of tension in the strings.

Antonio Soria was obviously much enthralled. Even when he was not playing, he was moving his whole body along with the music. His playing was of course brilliant.

After the brief intermission, the Chesapeake Orchestra continued with "An Alpine Symphony" by Richard Strauss. Maestro Jeffrey Silberschlag described the composition as a kind of trek through the Alps "like a travel writer” or a "Superman 3 soundtrack flyover the Alps". The piece included a wind machine and drum rolled thunder to describe night and a storm in Alps. The beginning was very dark and the whole piece had many moods. I heard ominous horns, flute raindrops along with long notes from the strings, and stormy timpani. The 22 sections of musical storytelling ranged from sunrise to fog to dangerous moments near the summit to blooming meadows. It was an altogether fascinating piece of music.

Plans for the River Concert on Friday July 22 at 730pm include local violinist José Cueto, “Amichai Songs” by David Froom, chair of the Colleges music department and works by Leonard Bernstein and Gustav Mahler.
Posted by Joanna at 11:06 PM No comments: Links to this post

Rained out!
Posted by Joanna at 9:25 PM No comments: Links to this post

The third 2011 River Concert of the season gathered a huge crowd, filling the lawn at St. Mary’s College of Maryland with a sea of people on the evening of Friday, July 1st . Before beginning the concert with the Chesapeake Orchestra playing the “Star Spangled Banner”, music director Jeffrey Silberschlag warned the crowd to ”get under their chairs for the flyover” after the anthem. No one ducked, but they did give a hearty cheer! “Danger Zone” from “Top Gun” immediately followed, sung by a passionate performer playing electric guitar. The flyover in honor of the 100th Anniversary of Naval Aviation included two Navy jets whose pilots, and some Navy brass, were introduced later in the concert.
Next on the musical program was “Holiday Overture” by Elliot Carter, written in the modern mode during World War II. The music was a little jumbled with a varied style and not particularly melodic. There were jerky sounding strings, bells, sticks and an abrupt ending.

The audience was amused by “A Grand, Grand Overture Op. 57 composed by Malcolm Arnold, a satire of a serious overture. The work was announced by Maestro Silberschlag as “going where no orchestra would ever dare go.” The Overture featured hedge trimmer played by Sam Goddard, two vacuum cleaners amusingly presented by St. Mary’s College President Joseph Urgo and Ginny Stein, muskets shot by costumed interpreters from Historic St. Mary’s City (as can only be portrayed in St. Mary’s County) and a leaf blower performed by Jim Bershon. Some of the “instruments” were actually substitutions for the original use of a floor polisher and real guns. To our amusement, the vacuum cleaners had a lovely sword fight, attempted to dust a nearby photographer’s camera and Joseph Urgo quietly vacuumed his yellow tie.

Jeffrey Silberschlag joked that the excerpts from the “Air Power Suite” by Norman Dello Joio were “one hour long. We’ll do it twice.” The work had lots of soaring melodies, a lot of repeated notes in the string section, full sized chimes and some lovely flutes. I was disappointed that the Chesapeake Orchestra didn’t play “Those Magnificent Men in their Flying Machines” a favorite song listed in the program.

After intermission, and the familiar “Liberty Bell March” by J. P. Sousa, Sterling Lambert, a professor of Musicology at the College read “Thomas Jefferson: In His Own Words” in his dramatic British tenor voice accompanied by the full orchestra. The music was a backdrop for the words which included everything from the “Bill of Rights”, to love, and the number of free and captive slaves Jefferson kept. The work ended with Jefferson’s words, “I Shall not die without the hope that life and liberty are on steady advance.”

The concert concluded with some rousing Sousa music including the “King Cotton March” and “Stars and Stripes Forever” (accompanied by many amateur singers in the audience), Morton Gould’s “American Salute” (based on “When Johnny comes Marching Home Again”) and of course P.I. Tchaikovsky’s ”1812 Overture” accompanied by fireworks over the St. Mary’s River. The many boats with their small lights bobbing in the waters of the river were a delightful sight to behold after the concert.
Posted by Joanna at 8:48 AM No comments: Links to this post