Cormorants from St Michael’s Manor in St. Mary’s County.  They were very far away, and my focus was off a little, but I liked the reflection...

On October 13th, we participated in Scott Kelby’s Worldwide PhotoWalk at Flag Ponds in Lusby, MD. Thirty three people signed up to participate on a pleasant sunny day.  Participants were encouraged to submit one photo to the world contest and 13 people shared a photo.  I wasn’t too impressed by my pictures that day, but Jim and I each submitted a photo. Jim worked especially hard on his panorama made of 12 images of one of the ponds and we practiced proper Photoshop techniques with my photo.  Imagine our surprise to learn that Jim received the winning photo for our walk.  It was just amazing, since just holding a camera can be difficult and challenging for him.  We were both thrilled.

Last month we visited relatives in Michigan.  Here are some highlights of Muskegon, near Lake Michigan.  The depot was an old train station, now used by the tourist bureau.  It featured a small train museum.  An interesting piece of trivia was that Buster Keaton, the talented comedian from old films was originally from Muskegon.  The old brick building had an interesting façade with lots of angles. 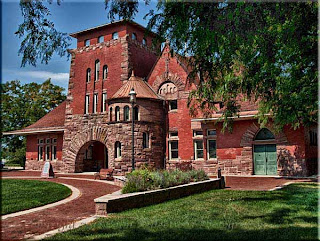 We drove to the local waste water management property to view the birds.  There were many birds, but they were difficult to photography.  It was rather exciting driving through a whole flock of birds though.  Later, I photographed this duck family in a stream that was much more accessible for photographers.

I took a tour of the Hackley Hume Historic site.  The Hackley house, originally owned by Charles Hackley a wealthyMuskegon lumber baron.  It was decorated in the Victorian era, so it was very elegant and full of beautiful wood carvings (of course!).  This photo was taken of the City barn, where the horses and carriages resided, looking out from the carriage entryway of the Hackley house. Pretty fancy barn! The Hume house next door was owned by Hackley’s business partner Thomas Hume and was less fancy in its 1920’s style. 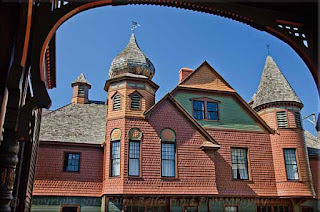 Posted by Joanna at 6:12 PM No comments: Links to this post