We had a slightly difficult trip to Merida on Aeromexico.  We had to change planes twice.  I ordered a wheelchair to make it easy for Jim, and I laughed when the distance was across the hallway in Detroit.  I almost lost my back support in Detroit. I left it on the plane, but suddenly remembered about it after the plane left. When I asked about it, they had held it behind the desk before the plane took off (so I retrieved it)!  It made all our driving less painful. In Mexico City, Jim was raced through the airport after a long delay in Detroit waiting for about 50 delayed passengers. I certainly got some exercise.

We arrived around midnight in Merida and took a short cab ride to the Hotel Hacienda Inn Aeropuerto.  It was a lovely little hotel with a very pretty pool.  We enjoyed talking to front desk man about Merida.  We tried to photograph the pool at night, but needed a tripod, so most of those photos were blurry at 2 AM.  We had breakfast by the pool and walked around in the morning.  The hotel was very photogenic with colonial touches and a Chacmool statue. 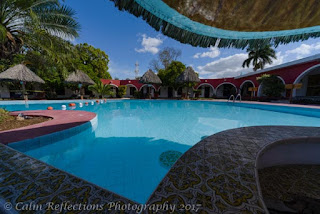 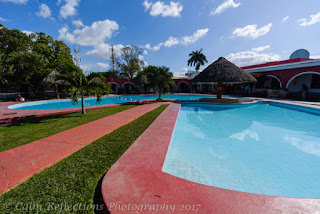 The beautiful pools at the Hotel Hacienda Inn Aeropuerto. 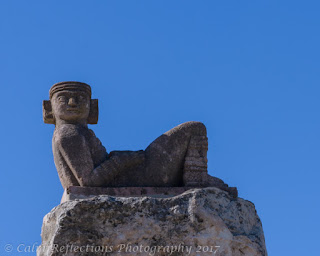 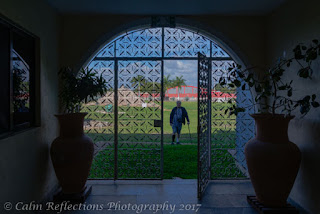 At Alamo car rental the next day, Theresa our clerk had recently read about Sylvanus Morley, Jim's Great Uncle, the famous Archaeologist.  We added Jim's left foot accelerator to the silver Nissan Sentra and off we drove to find a Walmart to purchase some items we needed for the trip.  It only took us about 5 hours, since it took us 4 tries and a lot of detours to find the underground entrance parking lot to the Walmart.
Then we headed south to the Hacienda Uxmal to see some interesting ruins for a few days.  We really liked the hotel too.  Many famous people have visited including Grace Kelly, Jackie Kennedy, Presidents and Kings. 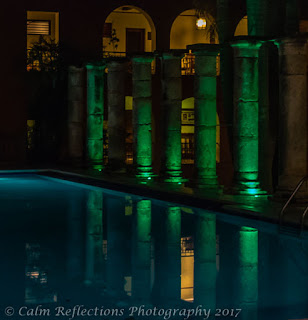 The pool was beautiful at night. 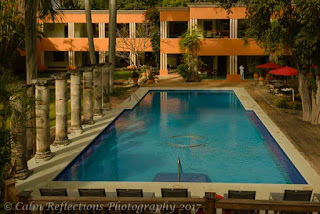 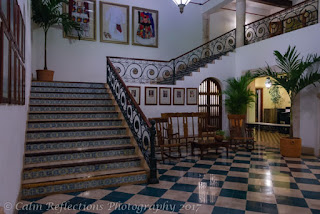 The main entrance hall was lovely, but we were happier with a ground floor room. 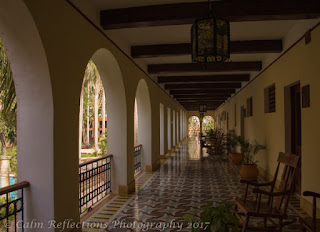 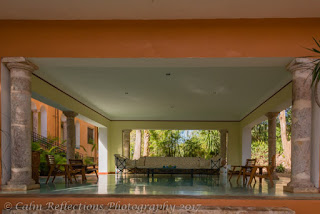 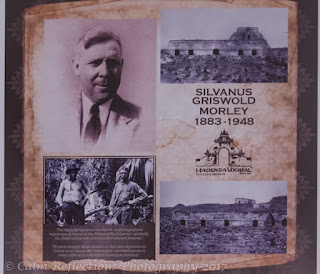 We even found a gallery sign about Jim's ancestor on the wall of the hotel, his Great Uncle, the famous Archeaologist.  Sylvanus Morley died when Jim was very young and was revered by the locals.